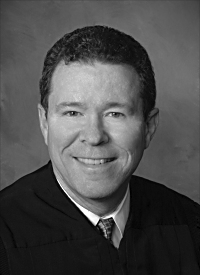 Judge Dowd was appointed to the Missouri Court of Appeals in 1994. He attended the University of Missouri-St. Louis and earned his bachelor of arts degree from Quincy University. He received his law degree from St. Mary’s University Law.

Before his appointment to the Court of Appeals, Judge Dowd served as a deputy juvenile officer and engaged in private practice. He was elected a magistrate judge. He later served as an associate circuit judge and a circuit judge in the City of St. Louis. His community interests include serving on the board of directors of the Mental Health Association, the Catholic Youth Council, and Dismas House.

Attorneys who responded to survey questions rated Judge Dowd highly (greater than 4 on a scale of 5) in all nine categories. Judge Dowd’s highest rating (4.57) was for being courteous toward attorneys.

The committee also reviewed a sample of opinions that Judge Dowd wrote. His opinions appeared to be well-written and well-organized, as well as consistent with precedent and statutes. In one case in which Judge Dowd disagreed with the other judges on the Court of Appeals panel, his view was later unanimously adopted by the Missouri Supreme Court. The committee discerned no apparent bias in his opinions.