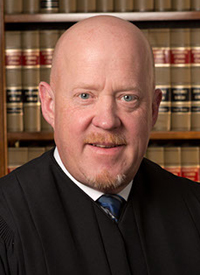 Judge Patrick W. Campbell was appointed as Family Court commissioner for the 16th Judicial Circuit in 2007, and as circuit judge in March 2013. He earned his bachelor’s degree in political science and administration of justice from the University of Missouri-Kansas City, and his law degree from the University of Missouri-Kansas City. He is on the board  of directors of the Community Service League and the Boy Scouts of America, Heart of America Council, and is a member of St. Mark’s Church.

Attorneys who responded to the survey questions rated Judge Campbell on a scale of 1 to 5, with 1 representing a response of “Strongly Disagree” and 5 representing a response of “Strongly Agree.” He received his highest scores for maintaining a professional demeanor in the courtroom (4.63) and being prepared for court (4.63). He received his lowest scores for decisions followed logically from the evidence presented (4.27) and assisting parties in narrowing key issues in dispute (4.30). Judge Campbell’s lower scores are well above the average for retention.

The committee reviewed survey responses submitted by jurors who were seated in jury trials before Judge Campbell.  Judge Campbell received an almost unanimously favorable response from the jurors on questions related to 10 separate criteria related to his conduct throughout the jury trials.

The committee has also reviewed three written opinions submitted by Judge Campbell dealing with numerous issues of constitutional law and found that the opinions were well-reasoned, clearly written, and faithful to the case precedents ruling on the Missouri Constitution and state statues.