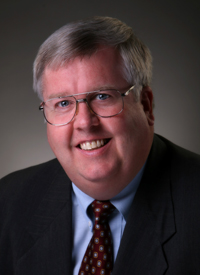 Judge David C. Jones was elected as the juvenile judge for the 31st Judicial Circuit on January 1, 2009. He received an undergraduate degree from Albright College, and a law degree from the Delaware Law School.

Judge Jones is an instructor at CLE programs on juvenile law and ethics, a member of the United Methodist Church, and a volunteer official for the Missouri State University ice hockey team.

Attorneys who responded to survey questions rated Judge Jones on a scale of 1 to 5, with 1 representing “Strongly Disagree” and 5 representing “Strongly Agree.” Judge Jones received his highest ratings for: addressing individuals respectfully (4.38); being prepared for court (4.33); and making sure all parties understood the court proceedings (4.27). Judge Jones’ other scores were for using courtroom time efficiently (3.84); starting courtroom proceedings on time (3.84); decisions following logically from the evidence presented (3.86) and allowing appropriate amount of time for each case (3.86).

The committee has also reviewed survey responses submitted by Judge Jones’ staff that dealt with positive and negative experiences with the judge, court demeanor, treatment of involved parties and administration. This information was considered in this evaluation.

The committee also reviewed written findings of fact and conclusions of law submitted by Judge Jones from a court-tried case.

Due to the privacy requirements of juvenile court proceedings, there were no juries to survey and committee members were unable to observe Judge Jones in court.