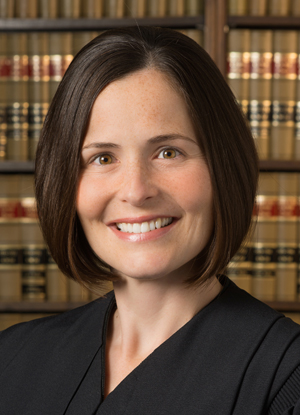 Associate Circuit Judge Janette K. Rodecap was appointed to Division 29 May 28, 2014. At the time of her appointment, she was serving as a trial team leader in the Jackson County Prosecutor’s Office.

Judge Rodecap joined the Prosecutor’s Office in 2006 as an assistant prosecuting attorney. She worked in the Street Crimes Unit for the majority of her tenure, as well as the Special Victim’s Unit. Her background also includes working as an assistant state attorney for the State Attorney’s Office in Florida, and as court counsel for the Supreme Court of Palau, an island country in the Pacific Ocean. In addition, she served as a judicial clerk to U.S. District Judge Nanette K. Laughrey of the Western District of Missouri after graduating from law school.