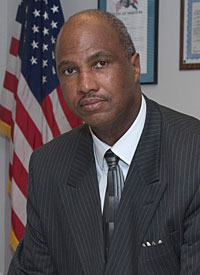 Judge Michael T. Jamison was appointed as an associate circuit judge for the 21st Judicial Circuit on May 8, 1997 and as a circuit judge on October 6, 2005. He graduated from Washington University with a Bachelor of Arts degree and received his law degree from St. Louis University.Judge Jamison is a member of The Missouri Bar, the Bar Association of Metropolitan St. Louis, the National Bar Association, and the Mound City Bar Association. He has served on the board of advisors for St. Louis Priory and volunteers with the Northside Community Center and the Bar Association of Metropolitan St. Louis Kids in Motion project.Since his last retention election, he has been assigned to criminal, civil and equity dockets.

Attorneys who responded to survey questions rated Judge Jamison on a scale of 1 to 5, with 1 representing “not at all” and 5 representing “completely.” More than 180 attorneys responded with respect to Judge Jamison. He received his highest scores for: treating people equally (4.30); maintaining proper order in the courtroom (4.27); and demonstrating appropriate demeanor on the bench (4.21). His lowest scores were for: being competent in the law (3.40); ruling on motions stating reasons and applying the law (3.45); and being prepared for hearings and trials (3.45).Sixteen juror surveys were returned with responses pertaining to Judge Jamison. Juror surveys were answered “yes” or “no,” with “yes” being a positive response and “no” being a negative response. Of the 10 criteria surveyed, Judge Jamison received 16 positive responses to six of the 10 criteria, and 14 positive responses to the other four criteria.A peer survey of fellow St. Louis County judges gave Judge Jamison an average score of 3.84.The committee also reviewed a judgment and order written by Judge Jamison, and found the ruling to be concise and consistent with Missouri case law and statutes.