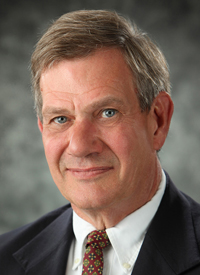 Judge James W. Van Amburg assumed the position of circuit judge of the 6th Judicial Circuit on September 12, 2013. Since that time, he has served as presiding judge of Platte County. Prior to that time, he served as an associate circuit judge in Platte County beginning in 1993, and served continuously until his appointment as circuit judge. He received his Bachelor of Arts degree from William Jewell College and his law degree from Washburn University. Judge Van Amburg also holds a Master of Arts degree from the University of Missouri-Kansas City.

Before his appointment to the court, Judge Van Amburg spent 11 years as an attorney in private practice. He served as an assistant prosecuting attorney for Platte County from 1987 through 1993. He also served as an assistant city attorney for the cities of Riverside, Houston Lake and Weatherby Lake. He is a member of The Missouri Bar, the Missouri Association of Probate and Associate Circuit Judges, the Missouri Association of Municipal and Associate Circuit Judges, and the Platte County Bar Association. He is also a participant at the annual KCMBA Probate Conference.

His community interests include volunteering at the Weston Applefest and acting as a guest speaker in the West Platte, Platte County R-III, and Park Hill School Districts. Judge Van Amburg served as a member of the West Platte R-II Board of Education from 1986 through 1992.

Attorneys who responded to survey questions rated Judge Van Amburg on a scale of 1 to 5, with 1 representing “not at all” and 5 representing “completely.” Judge Van Amburg received a rating above 4.0 in nearly all categories, which is an indication that attorneys have substantial respect for the judge’s skill and professionalism.

Judge Van Amburg received his highest scores for addressing individuals respectfully in the courtroom (4.65), using courtroom time efficiently (4.65), maintaining a professional demeanor in the courtroom (4.62), and allowing the appropriate amount of time for each case (4.57).  Judge Van Amburg’s lower scores were for citing the applicable substantive law (3.99), assisting parties in narrowing key issues in their dispute (4.09), providing decisions that follow logically from the evidence presented (4.22), and carefully considering arguments from both sides before ruling (4.28).

The committee reviewed survey responses submitted by staff members of the Platte County Circuit Court system. The members gave Judge Van Amburg ratings of “5” in nearly all categories. He received his highest scores for treating tparties equally, conducting proceedings in a neutral manner, assisting parties in narrowing key issues in their dispute, addressing all individuals respectfully in the courtroom, treating court employees respectfully regardless of position, listening carefully during court proceedings, and providing court staff with clear direction.

The committee has also reviewed three written opinions submitted by Judge Van Amburg dealing with issues of civil law relating to domestic and eminent domain practice, and found that the opinions were well-reasoned, clearly written, and they appear to fulfill all of the necessary legal requirements.