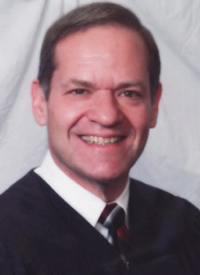 Judge Dan W. Imhof was elected as an associate circuit judge for the 31st Judicial Circuit in November 2006. He received his undergraduate degree from Missouri State University, and his law degree from the University of Missouri-Kansas City. He was in private practice prior to being elected to the bench.

Judge Imhof is a past president of Friends of the Zoo (Dickerson Park) and is a member of Campbell United Methodist Church.

Judge Imhof received his highest ratings for: starting courtroom proceedings on time (4.15); rendering decisions promptly (4.14); and allowing an appropriate amount of time for each case (4.13). Judge Imhof’s other scores were for issuing decisions that followed logically from the evidence presented (3.53); issuing rulings citing the applicable substantive law (3.64) and assisting parties in narrowing key issues in dispute (3.65).

The committee also reviewed survey responses submitted by jurors who were seated in jury trials before Judge Imhof, as well as surveys of his staff. Judge Imhof received an almost unanimously favorable response from the jurors on questions relating to 10 separate criteria related to his conduct throughout the jury trials.

The committee also reviewed survey responses submitted by Judge Imhof’s staff that dealt with positive and negative experiences with the judge, court demeanor, treatment of involved parties, and administration.  This information was considered in this evaluation.