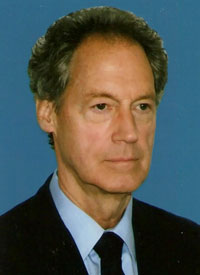 Judge Owens Lee Hull, Jr. was appointed circuit judge of the 6th Judicial Circuit in August 1998. Judge Hull has served as presiding judge of Platte County since 1998. Prior to that time, he served as a magistrate judge and an associate circuit judge in Platte County beginning in February 1978 and served continuously until his appointment as circuit judge. He received both his Bachelor of Science degree in public administration and his law degree from the University of Missouri-Columbia.

Before his appointment to the court, Judge Hull served as prosecuting attorney and as an assistant prosecuting attorney for Platte County. He is a member of The Missouri Bar, the Missouri Juvenile Justice Association, and the Platte County Bar Association. His community interests include the Veterans of Foreign Wars (VFW), the Weston Christian Church, and the Weston Historical Museum.

Attorneys who responded to survey questions rated Judge Hull on a scale of 1 to 5, with 1 representing “not at all” and 5 representing “completely.” Judge Hull received a rating above 4.0 in all categories, which is an indication that the attorneys have substantial respect for the Judge’s skill and professionalism.Judge Hull received his highest scores for maintaining and requiring proper order and decorum in the courtroom (4.67), efficiently managing his docket (4.65), being prepared for hearings and trials (4.57) and treating people who appear before him equally (4.53). Judge Hull’s lower scores were for clearly explaining all oral decisions (4.08), giving reasons for his rulings (4.08), weighing all evidence fairly and impartially before rendering a decision (4.22) and allowing parties latitude to present their arguments (4.23). The committee reviewed survey responses submitted by Judge Hull’s peers. Judge Hull received a perfect score of 5.00 in all categories.The committee also reviewed survey responses submitted by jurors who were seated in jury trials before Judge Hull. Jurors who responded to survey questions gave Judge Hull an almost unanimously favorable rating in all categories, including acting with patience and dignity, clearly explaining court procedure, legal issues and the responsibilities of the jury, maintaining control over the courtroom, and being well-prepared for the case.The committee has also reviewed three written opinions submitted by Judge Hull that dealt with issues of criminal, civil and juvenile law and found that the opinions were well-reasoned and clearly written, and they appear to fulfill all of the necessary legal requirements.