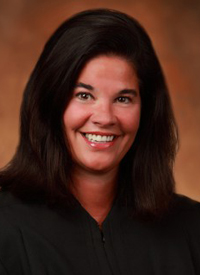 Judge Elizabeth B. Hogan was appointed as a circuit judge for the 22nd Judicial Circuit on December 13, 2012.  She had served previously as an associate circuit judge since 2005 and retained by the voters in the City of St. Louis in 2006 and 2010. She has served in: Division 26 (Associate Criminal Misdemeanors); Associate Division 14 (Family Court); Associate Division 8 and 24, which she handled simultaneously due to a shortage of judges; and Division 15, also a Family Court circuit division.

She is a parishioner of St. Roch’s Catholic Church and also serves in the Center for Women in Transition.

The committee reviewed survey responses submitted by attorneys who had trials before Judge Hogan and rated Judge Hogan on a scale of 1 to 5, with 1 representing “Strongly Disagree” and 5 representing “Strongly Agree.” Forty-two lawyers responded to the survey questions and gave Judge Hogan her highest scores for: considering the amount of case law required to make the decision, the judge was prompt in rendering a decision (4.40); allowing the appropriate amount of time to each case (4.39); and making sure that all parties (attorneys and their clients) understood the court proceedings (4.37). Judge Hogan’s lower scores were for:  assisting parties in narrowing key issues in dispute (4.06); her decisions following logically from the evidence presented (4.06); and treating the parties equally and conducted the proceedings in a neutral manner (4.17).

The committee was also provided with survey answers from 34 jurors who had served on a jury before Judge Hogan, and they evaluated her by answering 10 “yes” or “no” answers about her manner in the trial.  All 34 jurors answered “yes” to the questions asked about Judge Hogan.

All of the jurors considered Judge Hogan to be excellent, a credit to the St. Louis community, a joy to serve on a jury over which she presided, and hoped that they would have the opportunity to serve in her court again.

Court staff members who served in Judge Hogan’s court answered a survey as well.  There were four responses. All of the staff members gave Judge Hogan the highest marks. All of them made comments about what an excellent judge she is, and how respectful she is of all people who come before her or work with her in her duties as a judge, and all enjoyed working in her court room.

The committee also reviewed written opinions by Judge Hogan. Her opinions were well reasoned and featured easy-to-follow explanations, competent in the law, and adhered closely to precedent as well as to constitutional and statutory law. The precedents were cited and clearly explained.