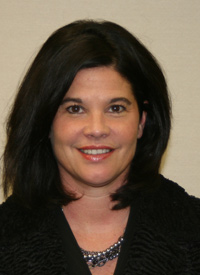 Judge Hogan was appointed a circuit judge for the 22nd Judicial Circuit in 2005 and retained by the voters in 2006. She graduated from DePauw University in 1990 with a B.A. in political science and received her law degree from Thomas M. Cooley Law School in 1996. Judge Hogan’s legal employment prior to her appointment to the bench includes serving as an assistant prosecuting attorney in the Jefferson County Prosecuting Attorney’s office, as an assistant circuit attorney in the St. Louis Circuit Attorney’s Office, private practice and CASA/Voices for Children.

She is the president of Women of St. Roch and is a coach for a girls CYC basketball team from St. Roch. Judge Hogan also serves as a volunteer judge for a workshop at St. Louis University for St. Louis Public School teachers. She is also a Wydown Fortnightly board member.

The committee reviewed survey responses from attorneys who have appeared before Judge Hogan and responded to questions rating Judge Hogan on a scale of 1 to 5, with “1” representing “not at all” and “5” representing “completely” to each of 18 separate questions dealing with all aspects of judicial performance.

The committee also reviewed survey responses submitted by more than 200 jurors who were seated in jury trials before Judge Hogan. Judge Hogan received an almost unanimously favorable response from the jurors on questions relating to 10 separate criteria for her conduct throughout the jury trials.

The committee has also reviewed a written opinion submitted by Judge Hogan which dealt with numerous issues of state law and found that the opinion was well-reasoned, clearly written and faithful to case precedents and the Missouri Constitution, and that she exercised her judicial discretion in an appropriate manner.