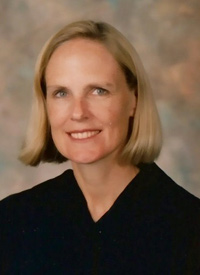 Judge Hoff was appointed to the Missouri Court of Appeals for the Eastern District in 1996. She earned her Bachelor of Science degree in education from the University of Missouri and received her law degree from St. Louis University.

On The Missouri Bar’s 2010 Appellate Court Evaluation Survey, attorneys who responded to survey questions rated Judge Hoff on a scale of 1 to 5, with 1 representing “not at all” and 5 representing “completely.”

Judge Hoff received her highest scores for being courteous toward attorneys (4.63), allowing parties to present their arguments and answers (4.49), and issuing timely opinions (4.48). Judge Hoff was not rated below a 4.00 in any category.

The committee also reviewed opinions written by Judge Hoff. Those opinions appeared to be in accordance with constitutional and statutory law. They were written in a straightforward fashion, and appeared to be consistent with precedent and statutes. In the case involving the most recent published opinion of Judge Hoff, in which she disagreed with the majority of judges hearing the case, the Supreme Court of Missouri reviewed the case and adopted Judge Hoff’s view.