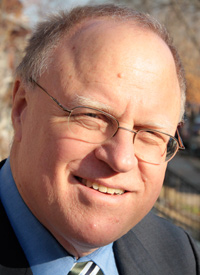 Judge Phillip D. Heagney assumed his post as circuit judge for the 22nd Judicial Circuiton April 1, 1996. He was retained in office by the voting public in 1998 and 2004. He is a graduate of Johns Hopkins University with a Bachelor of Arts degree in 1970, and a graduate of the Harvard Law School with a J.D. degree in 1976.

He serves as the chairperson of the court’s Jury Supervisory Committee. He is also a member of the court’s Public Education Committee, which works with high school students educating them on how the courts work. He volunteers at the St. Louis Board of Election Commissioners to meet with and swear-in people being trained to serve as election judges.

He is an active member of St. Cronin’s Catholic Church and Parish located in the Forest Park, but is also the manager of the St. Margaret of Scotland 6th grade boys basketball team and a treasurer of Boy Scout Troop #110, sponsored by the St. Margaret School. He is a member of the Gibson Heights Neighborhood Association and a block captain for his block in the City of St. Louis, working under the auspices of Operation Brightside.

Attorneys who responded to survey questions rated Judge Heagney on a scale of 1 to 5, with 1 representing “not at all” and 5 representing “completely.”

He received his highest scores for: treating people equally regardless of race, gender, ethnicity, economic status or any other factor (4.76); allows parties latitude to present their arguments (4.69), and displays fairness and impartiality towards each side of the case (4.68). Judge Heagney’s lower scores were for: efficiently managing his docket (3.57); and issuing timely opinions/decisions (3.61).

The committee also reviewed survey responses submitted by jurors who were seated in jury trials before Judge Heagney. Judge Heagney received an almost unanimously favorable response from the jurors on questions related to 10 separate criteria related to his conduct throughout the jury trial.

The committee has also reviewed a written opinion submitted by Judge Heagney that dealt with numerous issues involving the Missouri statute commonly referred to as the “Sunshine Law” and internal investigation by a local police department. The committee found that the opinion was well-reasoned, clearly written and faithful to the case precedents ruling on the statute issues.