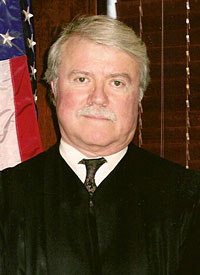 Judge Larry D. Harman was appointed circuit judge for the 7th Judicial Circuit in 1992. He received his Bachelor of Arts degree from William Jewell College and his Juris Doctorate degree from the University of Missouri-Kansas City. Judge Harman was in private practice from 1978 to 1980 and 1987 to 1992. He has also served as city attorney for Smithville, Missouri; city prosecutor for Liberty, Missouri; city attorney for Lathrop, Missouri; and Clay County Prosecuting Attorney before becoming a judge.Judge Harman has served as a member of the Missouri Trial Judge Education Committee. He has also served as a member of the Missouri Judge Legislative Committee. He has been a judicial delegate to the American Bar Association. He has received the National Judicial College Scholarship on three occasions. He is a past president of the Missouri Circuit Court Judges Section of the Missouri Judicial Conference. Judge Harman has been a member of the President’s Advisory Council for William Jewell College; served on the board of the Missouri Masonic Home board of directors; and volunteered in support of the Corbin Theater Company and Habitat for Humanity. He is an active musician and a member of the Kansas City Federation of Musicians 34-627.Judge Harman has been retained in the elections of 1994, 2000 and 2006.Judge Harman is a member of The Missouri Bar. He has served as a special judge in the Supreme Court of Missouri. He has been appointed to serve as a special judge more than 300 times in serious cases in circuits other than the 7th Judicial Circuit.

Attorneys who responded to survey questions asking if they agreed with 18 statements about Judge Harman rated Judge Harman on a scale of 1 to 5, with 1 representing “not at all” and 5 representing “completely.” Judge Harman received his high scores for showing an understanding of the rules of procedure and evidence (4.46); being prepared for hearings and trials (4.46); maintaining and requiring proper order and decorum in the courtroom (4.40); issuing timely opinions and decisions (4.34); and showing competence in the law (4.32).Judge Harman’s lower scores were for treating people equally regardless of race, gender, ethnicity, economic status or any other factor (4.16); not being affected by partisan considerations (4.16); weighing all evidence fairly and impartially before rendering a decision (4.15); allowing parties latitude to present their arguments (4.11); and displaying fairness and impartiality toward each side of the case (4.09).The committee received survey responses submitted by jurors who had participated in jury trials before Judge Harman. In reviewing those survey responses, the responses were overwhelmingly positive. Of the 43 responses received from former jurors, there were no negative responses to any of the questions on the survey. One juror responded that he did not believe the judge had clearly explained the legal issues of the case, but also commented that he was not sure it was the judge’s responsibility to do so.The committee also received a peer survey submitted by the other judges of the 7th Judicial Circuit. In the review provided by three respondents of the 7th Judicial Circuit, Judge Harman received a perfect score of 5.00 on all issues presented to the peers. The questions asked of the peer reviewers are the same as those asked of the lawyers practicing before Judge Harman.The committee received and reviewed three written opinions authored by Judge Harman. The committee found the opinions to be clear, concise and well-written. The committee also received two articles written by Judge Harman for use at Missouri’s Judicial College. The committee found the articles to be clear and informative.The committee did observe Judge Harman as he conducted public hearings. The observations of Judge Harman by the committee members were taken into account in the making of the recommendations set out below. The committee also met with Judge Harman and had the opportunity to interview him on May 24, 2012. The comments made by the judge and the answers made by the judge to questions posed to him by the committee were taken into account in the recommendations set out below.