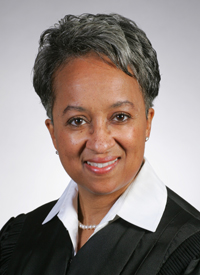 Judge Lisa White Hardwick was appointed to the Missouri Court of Appeals for the Western District in 2001. She served as chief judge of the court from 2010 to 2012. Prior to serving on the appellate court, Judge Hardick was a circuit judge in the 16th Judicial Circuit (Jackson County) from 2000 to 2010. Before that, she was in private practice from 1985 to 1999.

Judge Hardwick received the Up and Comers Award from the Kansas City Business Journal and the 40 Under 40 Award from Ingram’s magazine.

Attorneys who responded to survey questions rated Judge Hardwick on a scale from 1 to 5, with 1 representing “Strongly Disagree” and 5 representing “Strongly Agree.” She received her highest marks for: punctuality (4.41); attentiveness to the arguments of all parties during oral argument (4.25); attentiveness to the differing opinions of colleagues during oral argument (4.23); and writing opinions that follow an applicable standard of review for the case (4.21). Responders described Judge Hardwick as polite and professional.