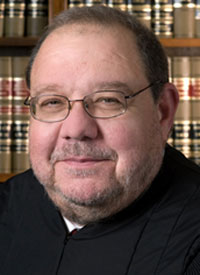 Judge Jack R. Grate was appointed a circuit judge for the 16th Judicial Court in 2004, and has been retained by voters in each election since. Judge Grate received his undergraduate degree from the University of Notre Dame in 1972 and his Juris Doctor from the University of Missouri-Columbia in 1976. Prior to his service on the bench, he was in private practice for 28 years, and also worked for Legal Aid of Western Missouri in the late 1970s.He has served on the boards of several different organizations, including the Kansas City Metropolitan Bar Association, Missouri Association of Trial Attorneys, Legal Aid of Western Missouri, the American Cancer Society, and the Kansas City Youth Court.

Attorneys who responded to survey questions rated Judge Grate on a scale of 1 to 5, with 1 representing “not at all” and 5 representing “completely.” He received his highest scores for: maintaining and requiring proper order and decorum in the courtroom (4.37); and treating people equally regardless of race, gender, ethnicity, economic status or any other factor (4.35). Judge Grate’s lower scores were for: rulings on dispositive motions state reasons and consistently apply the substantive law (3.97); and weighs all evidence fairly and impartially before rendering a decision (4.04). Judge Grate’s low scores are well above the average for retention.The committee reviewed a peer survey completed by a number of Judge Grate’s peer/judges. Again, the survey rated Judge Grate on a scale of 1 to 5. Judge Grate received his highest score (4.6) in 16 of the 18 categories. His lower scores were in: demonstrates appropriate demeanor on the bench (4.3); and allows all parties latitude to present their arguments (4.5). The committee also reviewed survey responses submitted by jurors who were seated in jury trials before Judge Grate. Judge Grate received at least 99 percent favorable responses from the jurors on questions relating to three of the 10 separate criteria regarding his conduct throughout the jury trials, and 100 percent favorable responses to the other seven criteria. The committee has reviewed a written opinions submitted by Judge Grate that dealt with numerous issues. The committee finds the opinion to be well-reasoned and clearly written.The committee observed Judge Grate performing his functions on the bench and found him to be efficient. The committee found his demeanor toward litigants, attorneys and staff to be professional and appropriate.