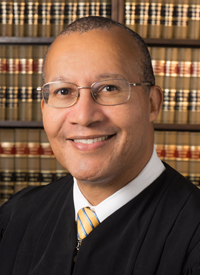 Judge Gregory B. Gillis was appointed associate circuit judge in April 2001. He earned both his bachelor’s degree and his Juris Doctor from the University of Missouri-Columbia.  Judge Gillis was formerly an assistant prosecuting Attorney for Jackson County and a Drug Court commissioner for the 16th Judicial Circuit.

Judge Gillis is involved with Operation Breakthrough in Youth Mentoring, and is a former member of the Activity Board. He has contributed to the Class in the Courtroom program televised on UMKC public television, LEAP (Lawyers Emphasizing Academic Performance), and the Bishop Sullivan Center Albert Fund. He is also a member of the JCBA Kit Carson Roque Jr. Scholarship Committee. He is a lifelong resident of Jackson County.

Attorneys who appeared before Judge Gillis responded to survey questions rating Judge Gillis on a scale of 1 to 5, with 1 representing a response of “Strongly Disagree” and 5 representing “Strongly Agree.” He received his highest scores for: Addressing individuals (e.g. attorneys, court staff, litigants, public, witnesses) respectfully in the courtroom (4.66); maintaining a professional demeanor in the courtroom (4.61); and listening carefully during court proceedings (4.52). Judge Gillis received lower scores for: starting court proceedings on time (3.40); rulings citing the applicable substantive law (3.65); and efficiently using courtroom time (3.72). The committee notes that his lower scores are well above the level supporting retention.

Because Judge Gillis does not normally conduct jury trials as a part of his position as an associate circuit judge, no juror responses were available.