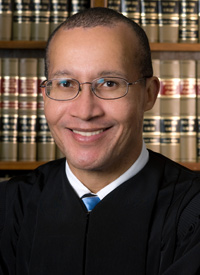 Judge Gregory B. Gillis was appointed an associate circuit judge for the 16th Judicial Circuit in April 2001. Prior to his appointment, Judge Gillis served as the Drug Court Commissioner for Jackson County. Before his appointment as Drug Court Commissioner, Judge Gillis was an assistant prosecuting attorney with Jackson County for 12 years. He received his bachelor’s degree and his law degree from the University of Missouri-Columbia.

Judge Gillis is an active participant in the University of Missouri-Columbia Law School Internship Program and volunteers for Operation Breakthrough, Kansas City Keys, and Friends of Leap. He also participates in “Class in the Courtroom” for middle school and high school students.

Attorneys who responded to survey questions rated Judge Gillis on a scale of 1 to 5, with 1 representing “not at all” and 5 representing “completely.”

He received his highest scores for: treating people equally regardless of race, gender, ethnicity, economic status, or any other factor (4.63); demonstrating appropriate demeanor on bench (4.56); and maintaining and requiring proper order and decorum in the courtroom (4.55). Judge Gillis’s lower scores were for: efficiently managing his time (4.00); effectively using pretrial procedure to narrow and define the issues (4.09); and giving reasons for ruling (4.11). However, the committee notes that Judge Gillis’s lower scores were far above the average for retention.

The committee has also reviewed a written opinion submitted by Judge Gillis which dealt with violations of city ordinances and found that the opinion was well reasoned and clearly written. A public comment was submitted noting Judge Gillis to be an outstanding judge with great judicial temperament. It also noted that his intellect enables him to make good decisions based on the law and that he treats all who come before him with the utmost respect.