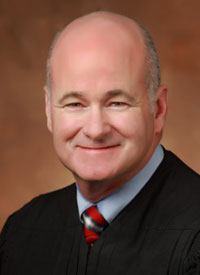 Judicial peers who responded to survey questions rated Judge Garvey on a scale of 1 to 5, with 1 representing “not at all” and 5 representing “completely.” He received his highest scores for: issues timely opinions/decisions (4.78); clearly explains all oral decisions (4.67); is prepared for hearings and trials (4.56); and is competent in the law (4.56). His lower scores were for: is not affected by partisan considerations (3.44); allows parties latitude to present their arguments (4.00); and gives reasons for rulings (4.00).The committee also reviewed survey responses submitted by attorneys who had proceedings before Judge Garvey that rated him on the same criteria and scale as those used by his judicial peers in the circuit. He received his highest scores for: issues timely opinions and decisions (4.43); is prepared for hearings and trials (4.37); efficiently manages his docket (4.43); understands the rules of procedure and evidence (4.35); and effectively uses pre-trial procedure to narrow and define the issues (4.31). He received his lowest scores for: is not affected by partisan consideration (4.01); demonstrates appropriate demeanor on the bench (4.02); and weights all evidence fairly and impartially before rendering a decision (4.10).The committee reviewed survey responses submitted by jurors who were seated in jury trials before Judge Garvey. Judge Garvey received approval ratings on 10 categories relating to his conduct during trial from 98.3 percent to 100 percent.The committee has also reviewed written opinions and rulings from Judge Garvey that were all well-reasoned with easy-to-follow explanations, competent in the law, and adhered closely to precedent, constitutional and statutory law.