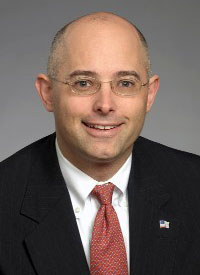 Judge Gary M. Gaertner, Jr. was appointed to the Missouri Court of Appeals in 2009. He earned his Bachelor of Science degree in economics, honors program, magna cum laude, and his law degree, cum laude, from St. Louis University. Before his appointment to the Court of Appeals for the Eastern District of Missouri, Judge Gaertner served as a circuit judge in the 21st Judicial Circuit (St. Louis County) from 2000-2009. Prior to his appointment to the bench, he was a federal prosecutor for the United States Attorney’s Office for the Eastern District of Missouri and an assistant state prosecutor for the Circuit Attorney’s Office. Judge Gaertner is presently serving as the chief judge of the Court of Appeals for the Eastern District of Missouri. Judge Gaertner’s community involvement includes serving as secretary and board member of The Crusade Against Crime of America (Medal Of Valor), and serving on the advisory trustee board for the Edgewood Children’s Center (Great Circle). He and his family are members of St. Clement of Rome parish. His activities in the legal community include membership in the Bar Association of Metropolitan St. Louis, the St. Louis County Bar Association, and The Lawyers Association of St. Louis. He also serves on the Legislative Review Subcommittee of The Missouri Bar. He was recognized as the “Star Volunteer” for Boys and Girls Town of Missouri in 2003 and received the John C. Shepherd Professionalism Award from The Bar Association of Metropolitan St. Louis in 1999.

On The Missouri Bar’s 2012 Appellate Court Evaluation Survey, attorneys who responded to survey questions rated Judge Gaertner on a scale of 1 to 5 on 10 different and positive judicial qualities, with 1 representing “not at all” and 5 representing “completely.” His highest scores were for being courteous toward attorneys (4.38), allowing parties to present their arguments and answer (4.32), issuing timely opinions (4.30), and treating parties equally regardless of race, sex or economic status (4.30). Judge Gaertner was not rated below a 4.00 in any category. The committee also reviewed opinions written by Judge Gaertner. Those opinions appeared to be in accordance with constitutional and statutory law. They were written in a straightforward fashion, and appeared to be consistent with precedent and statutes.