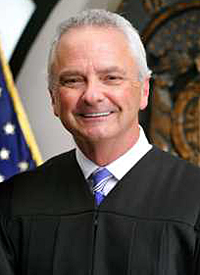 Judge Anthony Rex Gabbert was appointed to the Missouri Court of Appeals in 2013.  He received a Bachelor of Arts degree from the University of Missouri-Kansas City and his law degree from Mississippi College School of Law.

Before being appointed to the Court of Appeals, Judge Gabbert served as a circuit judge in the 7thJudicial Circuit, and served as the presiding judge of that court from 2008-2010. He previously served as an associate circuit judge for Clay County; as municipal judge for the City of North Kansas City; as prosecuting attorney for the City of Gladstone; and as an assistant prosecuting attorney for Clay County.

He has been involved in a number of professional and civic activities, including The Missouri Bar, the Kansas City Metropolitan Bar Association, the board of trustees of North Kansas City Hospital, the board of trustees of the Clay-Platte-Ray Mental Health Tax Levy Commission, as well as others. In addition, he has served as adjunct instructor at several colleges, including Mid-American Nazarene, Ottowa University, Park University, Penn Valley Community College, Rockhurst University and William Jewell College.

Judge Gabbert received an excellent rating from the attorneys who responded to a survey regarding his performance on the bench. The written comments from attorneys were very favorable as well.

The committee also reviewed a number of opinions written by Judge Gabbert. The opinions were well organized, easy to follow, well-reasoned, and in accordance with constitutional and statutory law.