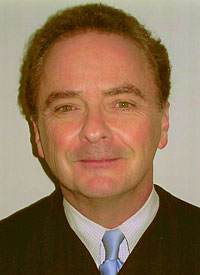 Attorneys who responded to survey questions asking if they agreed with 18 statements about Judge Gabbert rated Judge Gabbert on a scale of 1-5, with 1 representing “not at all” and 5 representing “completely.” Judge Gabbert received his high scores for demonstrating appropriate demeanor on the bench (4.76); maintaining and requiring proper order and decorum in the courtroom (4.78); treating people equally regardless of race, gender, ethnicity, economic status, or any other factor (4.63); showing competence in the law (4.63); and showing an understanding of the rules of procedure and evidence (4.61).Judge Gabbert’s lower scores were for efficiently managing his docket (4.50); not being affected by partisan considerations (4.48); clearly explaining all oral decisions (4.44); ruling on dispositive motions which state the reasons and consistently apply the substantive law (4.43); and issuing timely opinions and decisions (4.40).The committee received survey responses submitted by jurors who had participated in jury trials before Judge Gabbert. In reviewing those survey responses, the responses were overwhelmingly positive. Of the 21 responses received from former jurors, there were no negative responses to any of the questions on the survey. Two jurors left one question unanswered, with one juror noting that he or she could not recall the case involved clearly enough to make a response to a particular question.The committee received a peer survey submitted by other judges of the 7th Judicial Circuit. In the review provided by three respondents in the 7th Judicial Circuit, Judge Gabbert received a perfect score of 5.00 on all issues presented to the peers. The questions asked of the peer reviewers were the same as those asked of the lawyers practicing before Judge Gabbert.The committee received and reviewed three written opinions authored by Judge Gabbert. The committee found the opinions to be clear, concise and well-written.The committee did observe Judge Gabbert as he conducted public hearings. The observations of Judge Gabbert by the committee members were taken into account in the making of the recommendation set out below. The committee also met with Judge Gabbert and had the opportunity to interview him on May 24, 2012. The comments made by the judge and answers made by the judge to questions posed to him by the committee were taken into account in the recommendation set out below.