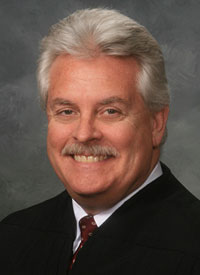 Judge William W. Francis, Jr. was appointed to the Missouri Court of Appeals in May of 2010. He graduatedcum laude from Southwest Missouri State University in Springfield in 1974 and received his law degree from the University of Missouri-Columbia in 1977.Judge Francis has been active in both state and local legal organizations, serving as chair of The Missouri Bar’s Workers’ Compensation Committee and vice chair of the Legislative Review and Insurance Law committees. He was president of the Springfield Metropolitan Bar Association.In addition, he has written numerous legal publications and served as a speaker at continuing legal education courses.He has been an active community member, including the American Cancer Society, the Alzheimer’s Association, the Founders Club at Missouri State University, and serves as an elder in his church.

Attorneys who responded to survey questions rated Judge Francis on a scale of 1 to 5, with 1 representing “not at all” and 5 representing “completely.” Judge Francis received his highest scores for: treating parties equally regardless of race, sex or economic status (4.49); being courteous toward attorneys (4.48); and allowing parties to present their arguments and answer (4.40). All survey results were rated at 4.16 or higher.The committee has also had an opportunity to review opinions written by Judge Francis. Those opinions appear to be: clear and concise in their use of language in opinions; cite well-documented legal precedents in the decision-making process; fair and impartial rulings in appeals brought to his court; and have strong evidence of legal acumen based upon the results of appeals forwarded to the Supreme Court of Missouri upholding appellate decisions in Judge Francis’s court.