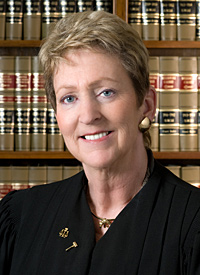 Judge Kathleen A. Forsyth was appointed to the 16th Circuit Court in 2003. She obtained a B.S. from Emporia State University and a J.D. from the University of Missouri-Kansas City School of Law.

Judge Forsyth’s previous judicial assignments include probate, estate and trust administration, mental health, and sexually violent predators and criminal. She is affiliated with The Missouri Bar, the Kansas City Metropolitan Bar and the Association of Women Lawyers of Greater Kansas City.

Judge Forsyth was evaluated by attorneys who appeared in court before her as well as jurors from the trials over which she presided. In 10 evaluation questions, more than 100 jurors rated Judge Forsyth at or above 98 percent approval.

Attorneys rated judges in 18 separate categories on a scale of 1 to 5, with 5 being the best rating. She received her highest scores for: treating people equally regardless of race, gender, ethnicity, economic status or any other factor (4.29); for maintaining and requiring proper order and decorum in the courtroom (4.25); and for allowing parties latitude to present their arguments (4.23). Judge Forsyth’s lower scores were for: understanding rules of procedure and evidence (3.90); for rulings on dispositive motions stating reasons and consistently applying the substantive law (3.90); and for being competent in the law (3.88). However, the committee notes that Judge Forsyth’s lower scores were far above the average for retention.

The committee reviewed a written opinion provided by Judge Forsyth concerning settling a discrepancy between estate trustees and their respective trust company. The opinion is thorough, reasonable, and justified in light of court precedents.