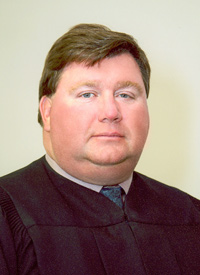 Judge Fischer was appointed to the Supreme Court of Missouri on October 23, 2008. He earned his Bachelor of Arts degree from William Jewell College in 1985 and received his law degree “with distinction” from the University of Missouri-Kansas City School of Law in 1988, where he was honored by being selected for Order of the Bench and Robe, the American Jurisprudence Award and serving on the UMKC Law Review staff.

Before his appointment to the Supreme Court of Missouri, Judge Fischer involved in the private practice of law and later was an associate circuit judge in Atchison County. In addition to his regular assignment to the Supreme Court, Judge Fischer has also served as a special judge for the Missouri Court of Appeals in the Western and Southern districts.

Judge Fischer’s community service includes involvement with the Leadership Board Fellowship of Christian Athletes in Northwest Missouri, the Rock Port Rotary Club, and the Atchison County Economic Development Corporation. He is a member of the Tarkio First Baptist Church and has served on the Tarkio Rodeo Board. He is also actively involved in educational programs designed to educate children about the dangers of alcohol and drug abuse.

On The Missouri Bar’s 2010 Appellate Court Evaluation Survey, attorneys who responded to survey questions rated Judge Fischer on a scale of 1 to 5, with 1 representing “not at all” and 5 representing “completely.”

Judge Fischer received his highest scores for being courteous toward attorneys (4.54), issuing timely opinions/decisions (4.45), and treating all parties equally regardless of race, sex or economic status (4.44). Judge Fischer was not rated below a 4.14 in any category.

The committee also reviewed opinions written by Judge Fischer. Those opinions were in accordance with Missouri law. The opinions provided clear and cogent explanations for Judge Fischer’s decision.