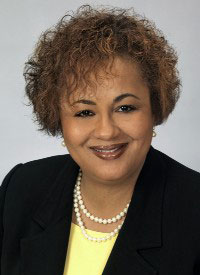 Judge Sandra Farragut-Hemphill was appointed as associate circuit judge of the 21st Judicial Circuit on March 13, 1991. Since her last retention election, her judicial assignments have included associate and circuit court civil dockets, an equity docket, and a Department of Revenue docket.After receiving her Bachelor of Science degree from Spelman College in Atlanta, Georgia, she received her law degree from the University of Florida School of Law. Prior to being appointed to the bench, her work history included serving as a staff attorney at Legal Services of Eastern Missouri and as an assistant county counselor for St. Louis County. She also serves as an adjunct professor for the Washington University School of Law and the St. Louis University School of Law.Judge Farragut-Hemphill is a member of The Missouri Bar, Bar Association of Metropolitan St. Louis, Mound City Bar Association, National Association of Women Judges, and the Women Lawyers Association of St. Louis.She is on the board of Almost Home, Inc. of St. Louis, and a former board member of the Matthews-Dickey Boys and Girls Club and the Girl Scout Council of Greater St. Louis. She is a member of Alpha Kappa Alpha Sorority, Inc. and Bethesda Temple Church, where she is coordinator, Daughters of the King, and Adult Leader – Camp J.A.M.

Attorneys were asked to rate each judge in 18 categories on a scale of 1 to 5, with 5 being the highest score. Some 199 attorneys responded regarding Judge Farragut-Hemphill, with her range of scores from 2.97 to 3.72. Her highest scores were for: treating people equally regardless of race, gender, ethnicity, economic status, or any other factor; maintaining and requiring proper order and decorum in the courtroom; and demonstrating appropriate demeanor on the bench. Her lowest scores on the attorney survey were for: rulings on dispositive motions state reasons and consistently apply substantive law; is competent in the law; and understanding rules of procedure and evidence.A peer survey of fellow St. Louis County judges rated Judge Farragut-Hemphill on the same 18 criteria used in the lawyer survey. Judge Farragut-Hemphill had an average score of 4.24, with a range of 3.78 (is competent in the law) to 4.56 (allows parties latitude to present their arguments and is not affected by partisan considerations).No juror responses were received, as Judge Farragut-Hemphill does not routinely preside over jury trials in her associate circuit court division.Judge Farragut-Hemphill submitted to the committee statistics concerning cases over which she has presided that have been appealed in the 21 years she has been on the bench. Of the 120 appeals that are no longer pending, 72 were dismissed by the appellate court or the parties, 32 were affirmed, 11 were affirmed in part, five were reversed, and eight were reversed and remanded.The committee also reviewed three orders submitted by Judge Farragut-Hemphill, including findings of fact, conclusions of law and judgment from 2010 in a suit on a deficiency of a note after foreclosure; a very length opinion regarding an order/judgment concerning motions for partial summary judgment in a complex coverage case from 2011; and a 2000 findings of fact, conclusions of law and judgment pertaining to a petition for injunction in which the parties disputed the enforceability of an assignment of an interest in a land trust. All three orders were well written and clear. To the extent that the orders cited case law, the orders were consistent with the case law cited.