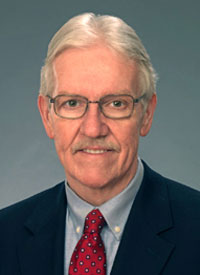 Judge John Essner has served as an associate circuit judge in the 21st Judicial Circuit’s Family Court since July 1999. He received his Bachelor of Arts degree from the University of California-Los Angeles and his law degree from St. Louis University School of Law.He is active in the Bar Association of Metropolitan St. Louis, the St. Louis County Bar Association, the National Council of Juvenile and Family Court Judges, and the Association of Family and Conciliation Courts.

Attorneys were asked to rate each judge on a scale of 1 to 5, with 5 being the highest score. Approximately 182 attorneys responded with respect to Judge Essner. His highest scores were for demonstrating appropriate demeanor on the bench (4.65) and being prepard for hearings and trials (4.64). His lowest score was 4.04 for issuing timely opnions/decisions.A peer survey of fellow St. Louis County judges gave Judge Essner an average score of 4.52.Juror surveys were unavailable, as Judge Essner has served in Family Court.The committee also reviewed several lengthy Family Court judgments written by Judge Essner. The facts and the law were clearly explained and the judgment was consistent with the case law stated.