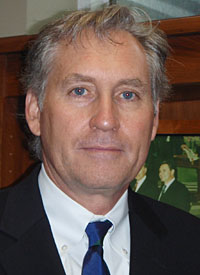 Judge Dennis C. Eckold was appointed as an associate circuit judge in the 6th Judicial Circuit in May 2010. He received his Bachelor of Arts degree in psychology from the University of Michigan and his law degree from the University of Missouri-Columbia.Before his appointment to the court, Judge Eckold spent many years in the private practice of law. He served as a commissioner and board president of the Kansas City Board of Police Commissioners. He is a member of The Missouri Bar, the Platte County Bar Association, and the Kansas City Metropolitan Bar Association. His community interests include Gloria Dei Lutheran Church and Eleemosynary Society of Platte County.

Attorneys who responded to survey questions rated Judge Eckold on a scale of 1 to 5, with 1 representing “not at all” and 5 representing “completely.” Judge Eckold received a rating above 4.0 in all categories, which is an indication that the attorneys have substantial respect for the judge’s skill and professionalism.Judge Eckold received his highest scores for treating all people who appear before him equally (4.53), allowing parties latitude to present their arguments (4.52), maintaining and requiring proper order and decorum in the courtroom (4.51) and demonstrating appropriate demeanor on the bench (4.49). Judge Eckold’s lower scores were for efficiently managing his docket (4.16), giving reasons for his rulings (4.27) and basing decisions on evidence and arguments (4.27). The committee reviewed survey responses submitted by Judge Eckold’s peers. He received his highest scores for treating all people who appear before him equally, displaying fairness and impartiality toward each side of the case, not being affected by partisan considerations and being prepared for hearings and trials.The committee also reviewed survey responses submitted by jurors who were seated in jury trials before Judge Eckold. Jurors who responded to survey questions gave Judge Eckold a perfect rating in all categories, including acting with patience and dignity, clearly explaining court procedure, legal issues and the responsibilities of the jury, maintaining control over the courtroom, and being well prepared for the case.The committee has also reviewed two written opinions submitted by Judge Eckold that dealt with issues of civil law. His opinions appear to be well-reasoned and clearly written, and appear to fulfill all of the necessary legal requirements.In addition to conducting his regular dockets and trials, Judge Eckold has worked to develop a DWI court in Platte County. The program is designed for prior offenders and requires intensive court supervision and counseling. The DWI court is presently functioning and has 27 participants. In addition, Judge Eckold has instituted a mediation program for small claims cases using volunteer attorney mediators. As a result, a high percentage of small claims cases have been successfully resolved through mediation.