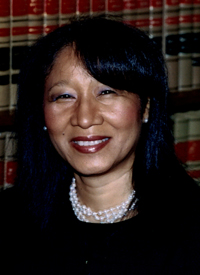 The Missouri Judicial Performance Appeals Panel finds and recommends that Judge Judy P. Draper BE RETAINED for 2014 and that the voters should be so advised.

Judge Judy Draper was appointed an associate circuit judge for the 21st Judicial Circuit in April 2004 and has been retained by Missouri voters since then.  She received a Bachelor of Science degree from the University of North Carolina and her law degree from Howard University. Prior to her current appointment, Judge Draper served as municipal judge in the municipalities of Berkeley and Northwoods.

Her professional affiliations include membership in the Mound City Bar Association, National Bar Association and Missouri Asian American Bar Association. She also served as an American Bar Association delegate. Judge Draper’s civic involvement includes: service to Hope House (an organization focused on transitional housing for women); Covenant Community Church; Korean American Association; and The Links, International (a civic, educational and cultural organization). She has been a speaker for several bar associations locally and nationally on various topics, including diversity, women’s issues and international trends. She wrote the article, “Ordinance Violation Right to a Jury Trial in Missouri” for Benchmark, a publication for the Missouri Municipal and Associate Circuit Judges Association. In her biographical information, she notes that from 2007-2010 she cleared a docket of 11,000 more cases than the other five judges handling the civil docket.

Her lowest scores were for: rulings cite the applicable substantive law (2.53); decisions followed logically from evidence presented (2.64); and was prepared for court (2.65). The 21st Circuit Judicial Performance Evaluation Committee identifies these as areas of needed improvement.

In addition to the lawyer survey, the committee reviewed survey responses submitted by jurors who were seated in jury trials before Judge Draper. Each judge was also able to submit up to five evaluations from court staff.  Five staff members completed favorable two-page surveys that asked staff to rate positive and negative experiences with the judge. The survey also asked staff to rate the judge’s performance relating to 15 separate criteria on a 1 to 5 scale regarding treatment of court employees, addressing concerns of courtroom staff and overall professionalism.

In reaching a recommendation, the 21st Circuit JPE Committee considered that while higher than during the previous evaluation period, Judge Draper’s attorney survey scores were the lowest. The committee also considered written comments contained in the attorney survey, personal comments from attorneys experienced in practicing in Judge Draper’s court. The circuit committee forwarded its proposed recommendation to Judge Draper on August 1, 2014, after which she appealed to the Missouri Judicial Performance Evaluation Appeals Panel.

The judicial performance evaluation process is intended to evaluate judges based on their attainment of identified performance standards.  The process is not intended to evaluate judges based on whether a particular judge’s evaluation scores were higher or lower than other judges.  Ranking judges against each other is inconsistent with best practices from JPE model programs and is not supposed to occur in Missouri.[1] Yet, Judge Draper and two other St. Louis County associate circuit judges were given a negative recommendation by the Circuit Committee because they were deemed to fall below a statistical range compared to the other nine St. Louis County judges evaluated in 2014. No other JPE evaluation committee in Missouri used this method. The JPE committees for Jackson, Platte, Clay, and Greene counties, the City of St. Louis, and the appellate committee, did not make negative recommendations for judges who were at the lower end of a statistical range compared to other judges.

Having considered the evidence and being fully advised, the Appeals Panel determines that Judge Judy Draper should be given a “do retain” recommendation for 2014.

[1] On the advice of a nationally recognized JPE consultant, Missouri changed its evaluation methodology to discontinue rating judges on whether they were perceived to be “average” or above or below “average.”   If a judge meets the objective performance standards evaluated in the JPE process, he or she should be recommended for retention.  The JPE process does not use a bell curve or similar method under which judges at the lower end of the curve are presumed to fail.