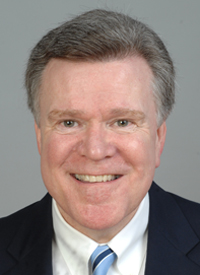 He serves as a commissioner of the Judge Dowd Soccer League, chairman of the Mental Health America McAtee Police Recognition Reception, on the Advisory Board of Directors of Saint Louis Crisis Nursery, and on the Advisory Board of Directors of Catholic Youth Apostolate. He is also a member of Saint Raphael the Archangel Parish. He is a member of The Missouri Bar, Lawyers Association of St. Louis, and St. Mary’s Alumni Association. He also served six years on the Commission for the Retirement, Removal and Discipline of Judges.

Attorneys who responded to survey questions rated Judge Dowd on a scale of 1 to 5, with 1 representing “Strongly Disagree” and 5 representing “Strongly Agree.” He received his highest scores for: addressing individuals respectfully in the courtroom (4.53); maintaining a professional demeanor in the courtroom (4.52); and allowing the appropriate amount of time for each case (4.47). Judge Dowd’s lower scores were for: his rulings following logically from the evidence presented (4.08); and assisting parties in narrowing key issues in dispute (4.10).

Jurors who served on a trial that before Judge Dowd evaluated him by answering 10 “yes” or “no” answers about his manner in the trial. All of the jurors agreed that Judge Dowd clearly explained their responsibilities to them, maintained control of the courtroom, and acted with patience. Judge Dowd’s scores never dropped below 97.4 percent affirmative, with his only non-unanimous score coming in response to this question: “Did the judge clearly explain court procedure?” (97.4 percent).

The committee also reviewed written opinions by Judge Dowd. His opinions were well reasoned, with easy-to-follow explanations, competent in the law, and adhered closely to precedent as well as to constitutional and statutory law. The precedents were cited and clearly explained.

On June 11, 2014, the committee also observed Judge Dowd in the courtroom, where he was straightforward and to the point. Judge Dowd was handling a motion docket, and his interaction with defendants and attorneys was efficient, professional, and direct.