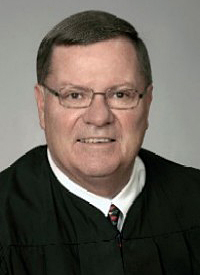 Judge Tom DePriest was appointed circuit judge in June 2000 and has been retained by voters in this state since then.  He received a bachelor’s degree in Business Administration from Southeast Missouri State University and his law degree from the University of Missouri-Columbia.

He served in the United States Army from 1969-71 and among his other civic involvements he is past chairman of the St. Louis County Family and Domestic Violence Council. Judge DePriest resides in South St. Louis County with his wife, Susie. The couple has three children.

Judge DePriest received his highest scores for: maintained a professional demeanor in the courtroom (4.71); addressed individuals (e.g. attorneys, court staff, litigants, public, witnesses) respectfully in the courtroom (4.69); and listened carefully during the court proceedings (4.60).  His lowest scores were for: ruling cited the applicable substantive law (4.37); assisted parties in narrowing key issues in dispute (4.40); and decision followed logically from evidence presented and issued an order which was clearly written, which tied at (4.44).

In addition to the Lawyer Survey, the committee reviewed survey responses submitted by jurors who were seated in jury trials before Judge DePriest.  Of the more than 90 former jurors who replied, 100 percent responded favorably to questions concerning 10 separate criteria related to his conduct throughout the jury trials.  Beyond the survey questions, former jurors supplied favorable written comments.

Each judge was able to submit up to five evaluations from court staff.  Four staff members completed favorable two-page surveys that asked staff to rate positive and negative experiences with the judge. The survey also asked staff to rate the judge’s performance relating to 15 separate criteria on a 1 to 5 scale regarding treatment of court employees, addressing concerns of courtroom staff and overall professionalism.

The committee also reviewed two written opinions submitted by Judge DePriest, which dealt with issues of family law. It found that the opinions were clearly written, well reasoned and faithful to the case precedents ruling on the Missouri Constitution and state statutes.