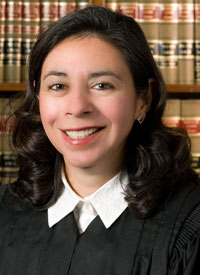 Judge Justine Del Muro has served as a visiting judge on the Court of Appeals for the Western District of Missouri and the Supreme Court of Missouri. For the past 11 years, she has been the chairperson of the Local Rules Committee for the 16th Judicial Circuit and sits on the court’s Executive Committee. She is currently the administrative judge for Family Court. She has been actively involved in the community as a chairperson for the Children’s Emergency Fund, as a board member for the Children’s Center for the Visually Impaired and LEAP (Lawyers Encouraging Academic Performance). She has also volunteered her services to children at St. Vincent’s Operation Breakthrough.

Attorneys who responded to survey questions rated Judge Del Muro on a scale of 1 to 5, with 1 representing a response of “not at all,” and 5 representing a response of “completely.” She received her highest scores for: maintains and requires proper order and decorum in the courtroom (4.10); and is prepared for hearings and trials (4.01). She received her lowest scores for: rulings on dispositive motions state reasons and consistently apply the substantive law (3.59); and is competent in the law (3.62). Judge Del Muro’s lower scores are above the average for retention.The committee reviewed a peer survey completed by a number of Judge Del Muro’s peers/judges. Again, the survey rated Judge Del Muro on a scale of 1 to 5. She received the highest scores from her peers for: treats people equally regardless of race, gender, ethnicity, economic status or any other factor (4.50); and is not affected by partisan considerations (4.54). Her lower scores were for: is competent in the law (3.93); and allows parties latitude to present their arguments (4.00). The committee notes that Judge Del Muro’s lower scores are well above the average for retention.The committee reviewed juror responses to surveys and the comments were found to be very favorable.The committee also reviewed written orders submitted by Judge Del Muro that dealt with issues of substantive law applied to evidence, pleading and procedural matters often encountered by trial judges. The committee found the orders to be well-reasoned and clearly written.