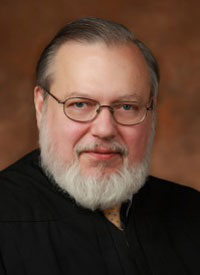 Judge Michael P. David was appointed as associate circuit judge on March 13, 1989 and was retained in 1990. He was appointed circuit judge on November 12, 1992 and retained by the voters in 1994, 2000 and 2006. He was the presiding judge of the 22nd Judicial Circuit from 2003 to 2004. Judge David is the past president of the Circuit Judges Association.Judge David was educated at the University of Missouri-St. Louis, receiving a Bachelor of Science degree in business administration, magna cum laude, in 1973. He received a juris doctor degree from St. Louis University School of Law in 1977 and served on the law journal. Judge David served as an assistant public defender in the City of St. Louis from 1977 to 1979 and Jefferson County from 1980 to 1982. He was elected to the Missouri House of Representatives for a term from 1982 to 1988. He was in private practice from 1979 to 1989, and served on the board of commissioners for the St. Louis Public Housing Authority from 1981 to 1983.

Attorneys who responded to survey questions rated Judge David on a scale of 1-5, with 1 representing “not at all” and 5 representing “completely.” He received his highest scores for: maintains and requires proper order and decorum in the courtroom (4.78); demonstrating appropriate demeanor on the bench (4.77); and allowing parties latitude to present their arguments (4.75). Judge David’s lower scores were for: rulings on dispositive motions stating reasons consistently and applying the substantive law (4.61); effectively using pre-trial procedures to narrow and define the issues (4.57); and not being affected by partisan consideration (4.53).Judge David’s peers also completed a survey with questions identical to those on the attorney survey. The peer review surveys yielded an overall average score of 4.47.The committee also reviewed survey responses submitted by jurors who were seated in jury trials before Judge David. Judge David received unanimously favorable responses from the jurors on questions relating to 10 separate criteria regarding conduct throughout the jury trials. The jurors described Judge David as dignified, professional and thoughtful, and found their service as jurors to be educational.The committee also reviewed a written opinion submitted by Judge David that dealt with numerous issues of constitutional law and found the opinions were well-reasoned, clearly written and faithful to the case precedent ruling on the Missouri Constitution and state statutes.Members of the committee also observed Judge David in a courtroom setting and found him to exhibit patience, respect for parties and attorneys, thoughtfulness and efficiency.