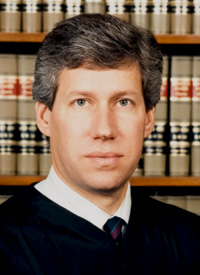 He is a member of The Missouri Bar and a member of the Kansas City Metropolitan Bar Association. He currently serves as chairman of the Supreme Court Alternative Dispute Resolution Commission. Since his last retention election, Judge Daugherty has served as the presiding judge of the 16th Judicial Circuit Court, the Criminal Division, Administrative Judge, and has handled civil and criminal dockets.

Judge Daugherty is chairman of the Board of the National ALS Association (Lou Gehrigs Disease) and is a member of the board of directors of the Keith Worthington Chapter of the ALS Association.

Attorneys who responded to survey questions rated Judge Daugherty on a scale of 1 to 5, with 1 representing a response of “not at all” and 5 representing “completely.”

He received his highest scores for maintaining and requiring proper order and decorum in the courtroom (4.57); treating people equally regardless of race, gender, ethnicity, economic status, or any other factor (4.49); and demonstrating appropriate demeanor on the bench (4.43). Judge Daugherty’s lower scores were for efficiently managing his docket (4.02) and being prepared for hearings and trials (4.04). However, the committee notes that Judge Daugherty’s lower scores were far above the average for retention.

The committee also reviewed survey responses submitted by jurors who were seated in jury trials before Judge Daugherty. Judge Daugherty received virtually unanimous favorable responses from the jurors on questions regarding 10 separate criteria related to his conduct throughout the jury trial.

The committee has reviewed a written opinion submitted by Judge Daugherty that dealt with issues regarding a motion to dismiss and motion for change of venue. The committee found the opinion to be well reasoned, clearly written, and faithful to Missouri case precedent.

A public comment was submitted noting Judge Daugherty to be “superlative in all aspects of a potentially difficult case.”