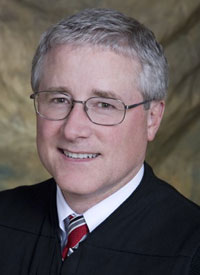 Judge Michael Cordonnier was appointed as a circuit judge by the governor on January 14, 2008 and was elected in the general election in November 2008. He graduated from the University of Missouri with a Bachelor of Science degree in business administration in 1979. He attended law school at the University of Tulsa and obtained his law degree in 1982.

Judge Cordonnier is involved in multiple professional activities, including: The Missouri Bar, the Springfield Metropolitan Bar Association (SMBA), member of Bench and Bar Committee of SMBA, and a participant in ASTAR (Advanced Science and Technology Adjudication Resource Center).

Judge Cordonnier is an active member of Christ Episcopal Church Foundation, where he is a board member and past chairman. He has been active in the Boy Scouts of America, where he has held various positions, including vice president of the Ozark Trails Council. He has also been a member of the board of directors of “Friends of the Zoo.”

Attorneys who responded to survey questions rated Judge Cordonnier on a scale of 1 to 5, with 1 representing “not at all” and 5 representing “completely.” He received his highest scores for being prepared for hearings and trials (4.79), maintaining and requiring proper order and decorum in the courtroom (4.79), and issuing timely opinions and decisions (4.78). Judge Cordonnier’s lower scores were for not being affected by partisan considerations (4.47), weighing all evidence fairly and impartially before rendering a decision (4.52), and allowing parties latitude to present their arguments (4.53).The committee also reviewed survey responses of other judges of the 31st Judicial Circuit who voluntarily participated in a peer review involving similar topics as those addressed in the attorney survey. Judge Cordonnier received unanimously favorable responses from his peers, with a perfect rating of 5.0 on all categories. The committee also reviewed survey responses submitted by jurors who were seated in jury trials before Judge Cordonnier. Judge Cordonnier received almost unanimously favorable responses from jurors on questions relating to 10 separate criteria regarding his conduct through the jury trials. The committee also reviewed opinions submitted by Judge Cordonnier in connection with judgments he entered in non-jury trial cases, and participated in observance of routine hearings and procedural matters.