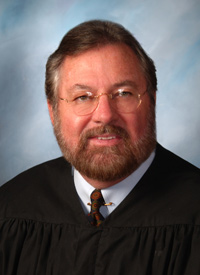 Judge J. Dan Conklin was first elected circuit judge in November 2004. Prior to being elected circuit judge, he served as an associate circuit judge since 1986. He received a bachelor’s degree in marketing from Metropolitan State College in Denver, Colorado and his law degree from the University of Arkansas in 1978. While in private practice, he served as the city attorney for the city of Republic and as a former instructor of marketing and business law at Missouri State University. He has previously served as presiding judge of the 31st Judicial Circuit.

He received his highest scores for allowing parties latitude to present their arguments (4.53); understanding rules of procedure and evidence (4.47); and treating people equally regardless of their race, gender, ethnicity, economic status or other factors (4.46). Judge Conklin’s lower scores were for issuing timely opinions and decisions (4.04); clearly explaining all oral decisions (4.05); and stating reasons and consistently applying the substantive law when ruling on dispositive motions (4.08).

The committee also reviewed survey responses submitted by jurors who were seated in jury trials before Judge Conklin. Judge Conklin received a unanimously favorable response from jurors on questions relating to 10 separate criteria regarding his conduct throughout the jury trials.

The committee has also reviewed written findings of fact and conclusions of law submitted by Judge Conklin from a court-tried case and participated in a courtroom observance during procedural matters.