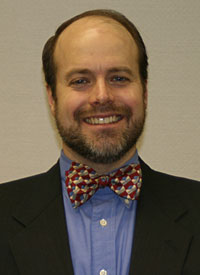 Judge Thomas C. Clark, II was appointed an associate circuit judge for the 22nd Judicial Circuit in February 2006 and retained by voters in 2008. He graduated from the University of Kansas with a bachelor’s degree in journalism and a bachelor’s degree in history in 1990. He received a master’s degree in public administration in 1993, and later his law degree, in 1998, from Saint Louis University.As an associate circuit judge of the 22nd Judicial Circuit, Judge Clark has served in Division 14 – family and adult abuse; Division 24 – criminal jury trial; Division 27 – civil bulk; and currently serves in Division 29 – civil jury trials. His civic and community involvements include The Missouri Bar, Boy Scouts of America, Eagle Scout Association, Leadership St. Louis/Focus, St. James Catholic Church, and Knights of Columbus.

Attorneys who responded to survey questions rated Judge Clark on a scale of 1 to 5, with 1 representing “not at all” and 5 representing “completely.”He received his highest scores for: is prepared for hearings and trials (4.15); issues timely opinions/decisions (4.12); efficiently manages his/her docket (4.10); and maintains and requires proper order and decorum in the courtroom (4.01). Judge Clark’s lower scores were for: rulings on dispositive motions state reasons and consistently apply the substantive law (3.79); weighs all evidence fairly and impartially before rendering a decision (3.71); displays fairness and impartiality toward each side of the case (3.68); and demonstrates appropriate demeanor on the bench (3.53).Additional evaluation information for Judge Clark was submitted by jurors who were seated in jury trials before him. Judge Clark received an almost unanimously favorable response, with a range from 95.1 percent to 100 percent in all 10 criteria areas related to his conduct throughout the jury trials.Judge Clark’s peers of the 22nd Judicial Circuit also completed a survey, with questions identical to those on the attorney’s survey. Judge Clark received scores ranging from 4.8 to 5.0 from his peers.The committee has also reviewed written opinions submitted by Judge Clark that dealt with legal and physical custody of minor children, small claims, and modifications of judgment of dissolution of marriage. The committee found that the opinions were well-reasoned and clearly written.