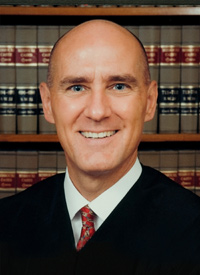 Judge Byrn was appointed a circuit judge for the 16th Judicial Circuit in September 2008. Prior to his appointment to the bench, Judge Byrn practiced law for 27 years with the law firm of Jeter, Rains & Byrn, LC. He received a bachelor’s degree in economics and social studies at Graceland University in Lamoni, Iowa, and his law degree from the University of Missouri-Kansas City. Judge Byrn also received his Civil Mediator Certification from the University of Missouri.

He is an active member of the Community of Christ Church and also volunteers for the Truman Neurological Center and Habitat for Humanity.

Attorneys who responded to survey questions rated Judge Byrn on a scale of 1 to 5, with 1 representing “not at all” and 5 representing “completely.”

He received his highest scores for: demonstrating appropriate demeanor on bench (4.73); maintaining and requiring proper order and decorum in the courtroom (4.71); and treating people equally regardless of race, gender, ethnicity, economic status, or any other factor (4.69). Judge Byrn’s lower scores were for: rulings on dispositive motions state reasons and consistently apply the substantive law (4.30); giving reasons for ruling (4.42); and not being affected by partisan considerations (4.43). However, the committee notes that Judge Byrn’s lower scores were far above the average for retention.

The committee also reviewed survey responses submitted by jurors who were seated in jury trials before Judge Byrn. Judge Byrn received a unanimously favorable response from the jurors on questions relating to 10 separate criteria regarding his conduct throughout the jury trials.

The committee has also reviewed a written opinion submitted by Judge Byrn which dealt with a motion for temporary restraining order and preliminary injunction and a motion to dismiss. The committee found that the opinion was well reasoned, clearly written, and faithful to Missouri case precedents.