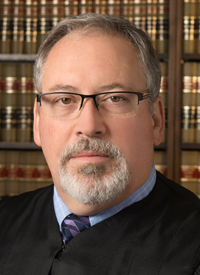 Judge Jeffrey L. Bushur was appointed as associate circuit judge for the 16th Judicial Circuit in July 2000. He earned his bachelor’s degree in philosophy and communication studies from the University of Missouri-Kansas City in 1983, and his law degree in 1986 from the University of Missouri-Kansas City. He is active in the Charleston Park Homes Association, Trout Unlimited, and the Christian Foundation for Children and the Aging.

Attorneys who responded to the survey questions rated Judge Bushur on a scale of 1 to 5, with 1 representing a response of “Strongly Disagree” and 5 representing a response of “Strongly Agree.” He received his highest scores for: considering the amount of case law required to make the decision, the judge was prompt in rendering a decision (4.01); gave reasons for a ruling when needed (3.99); and applied rules of evidence relevant to the case (3.97). He received his lowest scores for: started courtroom proceedings on time (3.46); maintained a professional demeanor in the courtroom (3.52); and addressed individuals (e.g., attorneys, court staff, litigants, public, witnesses) respectfully in the courtroom (3.53). Judge Bushur’s lower scores are above the average for retention.

Judge Bushur has not presided over jury trials in the past two years, as jury trials are not typically conducted in associate circuit court; Jtherefore no juror surveys were conducted.

On Judge Bushur’s criminal dockets, udgments and orders are used, and in his domestic assignment he does not prepare his own judgments unless a party asks for findings of fact and conclusions of law, and as yet no such request has been made. Therefore, no review was made of written opinions by Judge Bushur.