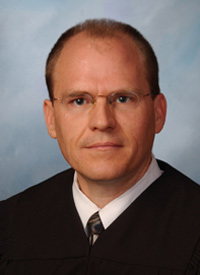 Judge Burrell is the vice-chair of the Judiciary’s Legislative Committee, a member of the Trial Judge Education Committee, and was also the inaugural recipient of the Springfield Metropolitan Bar Association’s Judicial Excellence Award in 2007.

Judge Burrell is also active in both professional and civic organizations, serving as a member of the Grace Classical Academy Board, the Victory Trade School Community Advisory Committee, as an Elder at Grace Chapel church, and is also active in the Greene County Teen Court and Kids Court programs.

Attorneys who responded to survey questions rated Judge Burrell on a scale of 1 to 5, with 1 representing “not at all” and 5 representing “completely.”

Judge Burrell received his highest scores for: being courteous toward attorneys (4.70); treating parties equally regardless of race, sex or economic status (4.62); and allowing parties to present their arguments and answer (4.60). Judge Burrell was not ranked below a 4.00 in any category.

The committee has also had an opportunity to review opinions written by Judge Burrell. The opinions are written with clarity, carefully laying out the background facts of the case in question and clearly analyzing the applicable law. Judge Burrell fairly and impartially applies the law to the facts.