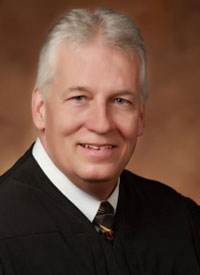 Judge Rex M. Burlison assumed the position of circuit judge for the 22nd Judicial Circuit on August 11, 2011. He obtained his undergraduate degree, a B.A. in political science/law enforcement, from Truman State University and his law degree, a J.D., from St. Louis University School of Law. He previously held public office as an alderman for the City of Cottleville, Missouri from 1999 to 2000. From April through December 2000, he served as an associate circuit judge for the 11th Judicial Circuit. He is a member of The Missouri Bar, The Bar Association of Metropolitan St. Louis, and the Lawyers Association of St. Louis. He is also a member of the historic Trinity Lutheran Church in Soulard, where he serves as a lector.

The committee reviewed survey responses from Judge Burlison’s peers and the other judges of the 22nd Circuit to each of 18 separate questions dealing with all aspects of judicial performance. He received a ranking of “5” on 17 of the 18 questions and a ranking of 4.83 on the 18th question.The committee also reviewed survey responses submitted by jurors who were seated in jury trials before Judge Burlison. While there was not a large number of juror responses due to the short time during which Judge Burlison has been on the bench, the juror responses were overwhelmingly favorable.The committee also reviewed survey responses from attorneys who have appeared before Judge Burlison and responded to questions rating Judge Burlison on a scale of 1 to 5, with “1” representing “not at all” and “5” representing “completely,” to each of 18 separate questions dealing with all aspects of judicial performance. Judge Burlison received average scores above 4 on all questions, with his highest scores of 4.40 for maintaining and requiring proper order and decorum in the courtroom and 4.38 for demonstrating appropriate demeanor on the bench. His lower scores were 4.04 for his competence in the law and 4.10 for note being affected by partisan considerations.The committee also reviewed a written opinion submitted by Judge Burlison that dealt with numerous issues of state and federal law, and found that the opinion was well reasoned, clearly written and faithful to state and federal case precedents and the Missouri constitution, and that he exercised his judicial discretion in an appropriate manner.