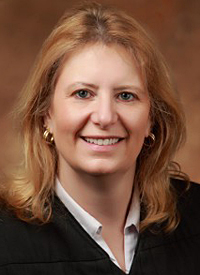 Judge Theresa Counts Burke was appointed as an associate circuit judge for the 22nd Judicial Circuit in 2008 and retained by voters in November 2010. She received a Bachelor of Arts degree  in political science from Southern Illinois University at Edwardsville in 1985. She received her law degree from the Saint. Louis University School of Law in 1988.

Judge Burke has served in the Family Court and criminal misdemeanor trial divisions and felony arraignment and preliminary hearing divisions of the 22nd Circuit Court. Previously, she was a provisional judge in the municipal court of the City of St. Louis. She is a member of the Missouri Association of Probate and Associate Circuit Judges, Missouri Supreme Court Committee on Access to Family Courts, the Women Lawyers Association of Greater St. Louis, 22nd Circuit Drug Court Committee, Legislation Committee and E-Filing Committee.

She is also a Community School PTO member. She has been an adjunct professor at Fontbonne University, teaching constitutional law. She is also a founding member of Lawyers for Kids, LLC, a not-for-profit corporation. Judge Burke is a frequent guest speaker before numerous civic organizations and professional organizations.

Jurors who had served on a trial before Judge Burke also responded very favorably when asked about her manner in trial as well as her explanations of trial procedure and the responsibilities of the jury.

Staff members who served in Judge Burke’s courtroom answered a survey and all gave Judge Burke the highest marks, particularly in regard to her courteous manner, timeliness, and respect shown for all her staff and citizens who appear in her court.

The evaluation committee found the written orders of Judge Burke to be well-supported by the law and facts and reflecting sound reasoning.