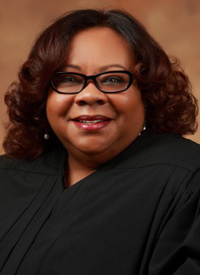 Judge Paula Perkins Bryant was appointed as an associate circuit judge for the 22nd Judicial Circuit in 2004 and retained in 2006 and 2010. She received a Bachelor of Science degree from the University of Missouri-St. Louis and her law degree from Saint Louis University School of Law.

She is active in a breast cancer awareness group known as The Breakfast Club and remains an active member of Phi Delta Delta Law Fraternity and Delta Sigma Theta Sorority.

Staff members who served in Judge Bryant’s courtroom answered a survey and all gave Judge Bryant excellent reviews emphasizing her efficient use of time, her innovative approach in Family Court, and her dedication and hard work as evidenced by trying more than 30 jury trials in one year. She is thoughtful and courteous to the staff and citizens that appear in her court.

The evaluation committee found Judge Bryant’s written orders to be well-supported by the law and facts reflecting sound reasoning.