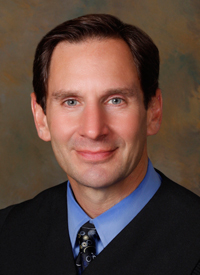 Judge Jason R. Brown assumed his position as associate circuit judge for the 31st Judicial Circuit on January 1, 2005. He was then elected to office by Greene County voters in 2006 and retained in 2010. He received a bachelor’s degree from the University of Missouri, with honors, in 1985, and graduated from Vanderbilt University School of Law in 1988. He served in private practice for 16 years prior to taking the bench in 2005.

Judge Brown has served on the Greene County Teen Court as a volunteer judge; a member of the Missouri Supreme Court Civic Education Committee; State Courts Administrator Traffic Bench Guide Editor in 2010 and 2013; as a board member with the Missouri Association of Probate and Associate Judges; and is on the 31st Judicial Circuit Pretrial Release Committee.

He is also a board member of the Good Samaritan Boys Ranch and is a member of Springfield Southeast Rotary, where he has held the position of sergeant at arms for 2013-2014.

Attorneys who responded to survey questions rated Judge Brown on a scale of 1-5, with a 1 representing “Strongly Disagree” and 5 representing “Strongly Agree.” He received his highest scores for: addressing individuals respectfully in the courtroom (4.86); maintaining a professional demeanor in the courtroom (4.80); and being prepared for court (4.74). Judge Brown’s other scores included: deciding following logically from the evidence presented (4.32); citing the applicable law (4.33); and assisting parties in narrowing key issues in dispute (4.34).

Juror survey responses were submitted by jurors who served in trials before Judge Brown. Judge Brown received unanimously favorable responses from all jurors on questions relating to 10 separate criteria related to his conduct throughout the jury trials.

The committee also reviewed surveys submitted by Judge Brown’s staff that dealt with positive and negative experiences with the judge, court demeanor, treatment of involved parties, and administration.  This information was considered in this evaluation.

Judge Brown was also personally observed in court on June 6, 2014. Judge Brown was observed to be respectful to everyone in the courtroom, courteous and efficient. Prior to proceeding to the next case in line, he made sure that the unrepresented individuals knew exactly where they stood and what would happen next in their case. The committee also reviewed written findings of fact and conclusions of law submitted by Judge Brown from a motion for summary judgment and two court-tried cases.