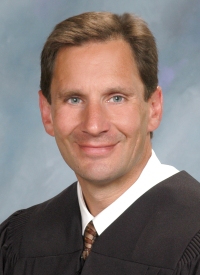 Judge Jason Brown assumed his position of associate circuit judge for the 31st Judicial Circuit on January 1, 2005. He was elected by the voters to the bench in 2006. He received a bachelor’s degree from the University of Missouri in 1985, and graduated from Vanderbilt University School of Law in 1988. He served in private practice for 16 years prior to taking the bench in 2005.

Judge Brown is currently a board member with the Missouri Association of Probate and Associate Judges; a member of the civil infractions working committee of the Office of State Courts Administrator; a member and former board member of the Springfield Metropolitan Bar Association; a volunteer judge for the Greene County Teen Court; and serves on the Professionalism Committee of The Missouri Bar. He currently serves on the board of the Good Samaritan Boys Ranch, is an advisor for the Leadership Springfield Academy, and has served in the past on Springfield Little Theatre, Lakes Country Rehab Center, and Springfield Southeast Rotary boards. In October 2009, he was voted “Best Associate Judge” (southern district) in the Missouri Lawyers’ Weekly readers’ poll.

Attorneys who responded to survey questions rated Judge Brown on a scale of 1 – 5, with 1 representing “not at all” and 5 representing “completely.” He was rated highest in maintains and requires proper order and decorum in the courtroom (4.85) and demonstrates appropriate demeanor on the bench (4.82). His lowest areas were rulings on dispositive motions state reasons and consistently apply the substantive law (4.58) and bases decisions on evidence and arguments (4.59).

The committee also reviewed survey responses submitted by jurors who were seated in jury trials before Judge Brown. Judge Brown received nearly unanimous favorable responses on questions relating to 10 separate criteria regarding his conduct throughout the jury trials.