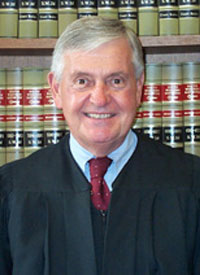 Judge Richard C. Bresnahan was appointed circuit judge on June 4, 2004. Prior to his appointment, Judge Bresnahan actively practiced law for 31 years. He was very active in local bar associations, having served as president of the St. Louis County Bar Association in 1992 and receiving its Distinguished Service Award in 2002. Judge Bresnahan currently serves on the Board of Governors of The Missouri Bar.

Attorneys who responded to survey questions rated judges on a 1-5 scale, selecting one of five boxes on a scale from “not at all” to “completely.” The lowest score received by Judge Bresnahan was 4.12 (“is not affected by partisan considerations”) and a high score of 4.49 (“maintains and requires proper order and decorum in the courtroom”). Judge Bresnahan’s other scores included: 4.34 for “treating people equally and fairly” and a score of 4.42 for “demonstrating appropriate demeanor on the bench.” Likewise, he received a score of 4.30 for “understanding the rules of procedure and evidence” and a score of 4.35 for “effectively managing his docket.”Jury surveys were reviewed, with all surveys having a universally favorable impression of the judge. Comments such as “outstanding,” “this judge was great in all respects,” and “the judge was very professional” are sprinkled throughout the comments made by the surveyed jurors.Judge Bresnahan’s peer review scores were the equivalent of his lawyer survey, with an overall average score of 4.23. His highest marks were for “proper order and courtroom decorum” (4.44); and “demeanor, decisions based on evidence and arguments, not affected by partisan considerations, impartiality, and treating people equally” (each 4.33).