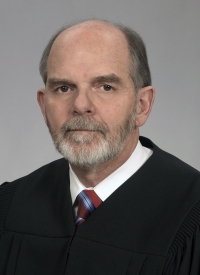 Judge Douglas R. Beach was appointed as an associate circuit judge for the 21st Judicial Circuit in November 2005 and as a circuit judge in May 2010. Since his appointment as a circuit judge, he has served on the Family Court.Judge Beach completed his undergraduate studies at Central Connecticut State University and received his law degree, cum laude, from the New England School of Law.Prior to his appointment to the bench, he served as president of the St. Louis County Bar Association and the American Academy of Matrimonial Lawyers.Judge Beach has served the Children’s Home Society and Kids in the Middle program. He has received numerous awards, including receipt of the Champion of Kids Award in 2011. He served our country in the military and is a retired lieutenant colonel in the U.S. Marine Corps Reserve. He was instrumental in the passage of Proposition S and has been involved with Citizens for Safe Courts and Kids.

Attorneys were asked to rate each judge on a scale of one to five, with five being the highest score. Approximately 200 attorneys responded with respect to Judge Beach. His highest scores were for: is prepared for hearing and trials (4.54); and understands rules of procedure and evidence (4.45). His lowest score was for demonstrating appropriate demeanor on the bench (3.98).A peer survey of fellow St. Louis County judges gave Judge Beach an average score of 4.35.Due to his service on the Family Court, there are no juror surveys available for him.The committee also reviewed several judgments written by Judge Beach in Family Court cases. The findings of fact, conclusions of law and judgment were well reasoned, well written, and consistent with the case law cited.