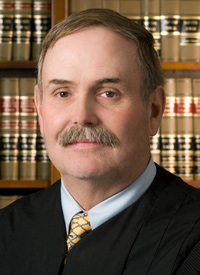 Judge Atwell is a member of the 2nd Presbyterian Church, Kansas City. He is involved with the Williams Education Fund, and an advisor on the 24th Street Project Boys and Girls Club.

Attorneys who responded to survey questions rated Judge Atwell on a scale of 1 to 5, with 1 representing a response of “not at all,” and 5 representing “completely.”

He received his highest scores for: treating people equally regardless of race, gender, ethnicity, economic status, or any other factor (4.75); and allowing parties latitude to present their arguments (4.73). Judge Atwell’s lower scores were for: efficiently managing his docket (4.52); and issuing timely opinions/decisions (4.57). However, the committee notes that Judge Atwell’s lower scores were far above the average for retention.

The committee did not review juror responses to surveys, due to Judge Atwell’s recent assignment to the juvenile court, which does not conduct jury trials.

The committee has reviewed a written opinion submitted by Judge Atwell which dealt with complex issues related to the certification of a class action. The committee finds the opinion to be well reasoned and clearly written.