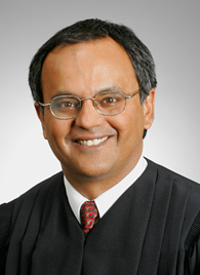 Judge Ahuja was appointed to the Missouri Court of Appeals in December 2007. Prior to his appointment, Judge Ahuja was in private practice from 1989-2007 and before that was a law clerk for Judge Richard Cudahy of the United States Court of Appeals for the Seventh Circuit. Judge Ahuja received his B.A. in philosophy and English literature, with highest distinction, from the University of Kansas and received his J.D. from Yale Law School.

On The Missouri Bar’s 2010 Appellate Court Evaluation Survey, attorneys who responded to survey questions rated Judge Ahuja on a scale of 1 to 5, with 1 representing “not at all” and 5 representing “completely.”

Judge Ahuja received his highest scores for being courteous toward attorneys (4.65), treating parties equally (4.60), being fair and impartial toward each side of the case (4.58), and allowing parties to present their arguments and answers (4.57). Judge Ahuja was not rated below a 4.00 in any category.

The committee also reviewed opinions authored by Judge Ahuja. The opinions appeared to be in accordance with precedent and statutory law. The opinions were clearly-written and they were detailed in the facts presented, the law analyzed, and in the result reached.